Anaaj, a Pakistani man with a severe allergic reactions to any food he had not tried by the age of nine invited me to join him for an evening of monotype printmaking on the Salmongun Club. I arrived at exactly 6:30pm.

Two long tables were set up in a gallery full of nautical themed paintings, and a group of about 20 white folks with yellow earrings and wrinkles sat in front of heavily inked copper and plexi plates. Anaaj was nowhere to be seen.

I plopped my backpack and yoga mat down at the end of the table close to a group of women sipping wine and using qtips to mark their plates and found myself a glass of water. The bartender was making himself cozy with the bowl of chips and dip and gave me a foul look when I asked for my water in a glass, not a plastic cup, please.

“Are you a member?” He snarled at me.

“It’s what I want,” I replied, and took my fancy glass back to the party.

The Salmongun Club is an (apparently) exclusive art club located on 5th avenue between some streets. The interior of the building is creaky and wooden, the painted portraits of lords lining the walls are lit by a hanging chandelier. The 3 hour monotype party costs $30, paper, ink, and plates provided.

I began with a plexi plate, inked the surface evenly using a small breyer, and took my seat next to the ladies. I bumped the table a bit when I sat down in the hips which have grown faster than my memory of my own body has, and the two women across from me tensed and swallowed me in the same way I imagine they regard an average African American man who happens to find hisself eating a chocolate croissant seated across from two old wrinkles with gold earrings. I’m just guessing.

“Hi.” I said, and began to fill my plate with little J marks drawn with the pointed end of a skewer. One woman replied politely and the other ignored me. I scooted my chair and continued to draw, noticing a familiar face a few seats to my right. Erica.

Erica makes woodcuts at the RYGBV printshop, where I monitor one day a week in exchange for studio hours. After a brief public display of proper nouns, the woman who originally drew me off as a vase of flowers asked if I draw patterns.

“I’m drawing a pattern now,” I told her, wary she would ruin my art party by talking about it like a vacation.

“Oh,” she said, in equal reserve for the obvious.

The pattern is a simple series of backwards and forward facing J’s, which I use to mark the even surface. This repetitive, small form helps me focus my hands and loosen my investment in making a recognizable object. When I am finished drawing J’s, I line up behind the small etching press with my inked plate.

Jon, the president of the Salmongun Club, is tightening the press and running monoprints through with a steady twist. “Come see me do an edition,” he tells the crowd. (“Come see my etchings, anyone?”) No one laughed.

My first image printed well, and when I returned to make a second plate at the table, the ladies were occupied elsewhere and the two chairs across from me were empty. I decided to draw them, and gradually added the paintings in the background and the brown panels on the bottom of the walls.

Anaaj slid into a chair next to me without my noticing, and gently asked over my shoulder,

Startled, I looked up and smiled at him. After exchanging greetings, I asked if he would like to eat pizza.

I made certain my plate was ready for printing before entering the dining area and finding the last piece of veggie pizza. Anaaj found some chips and introduced me to Charles, who, upon seeing my Mount Holyoke College sweatshirt, asked me if I attended.

“Yes,” I said, and put my pizza next to him carefully. While I ate I listened to his stories about Calvin Coolage’s wife and gave my account of the 5 College area. He went to Amherst and married a woman from Mount Holyoke.

After pizza, I went for a wacky third print. This time I enjoyed allowing the abstract shapes and ticks guide the image. I ended up with some upside down creature with a few hairs and an open eyeball. I traded the image for a print of an dark female figure which a young blonde woman about my age made.

The printing party ended and I meandered my way into a group of young white women who were to be given a tour of the library upstairs. We climbed a large creaky staircase and entered through two heavy mahogany doors. I was a bit fearful of the dusty books, so I gazed at the portraits and paint paddles of famous artists which lined the wall.

Jon told us about his favorite books, and then brought us to the map at the end of the library, which (inaccurately) labeled each section of the room. I eventually brought myself to pull a book from the shelf, “American Etchings.” The whole library fell down around me and I ran out the doors. 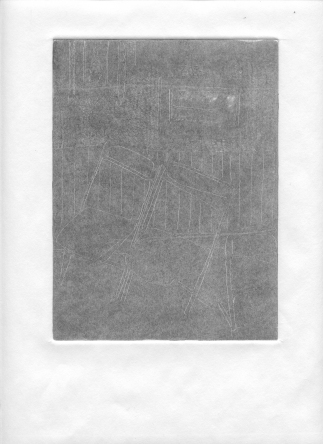